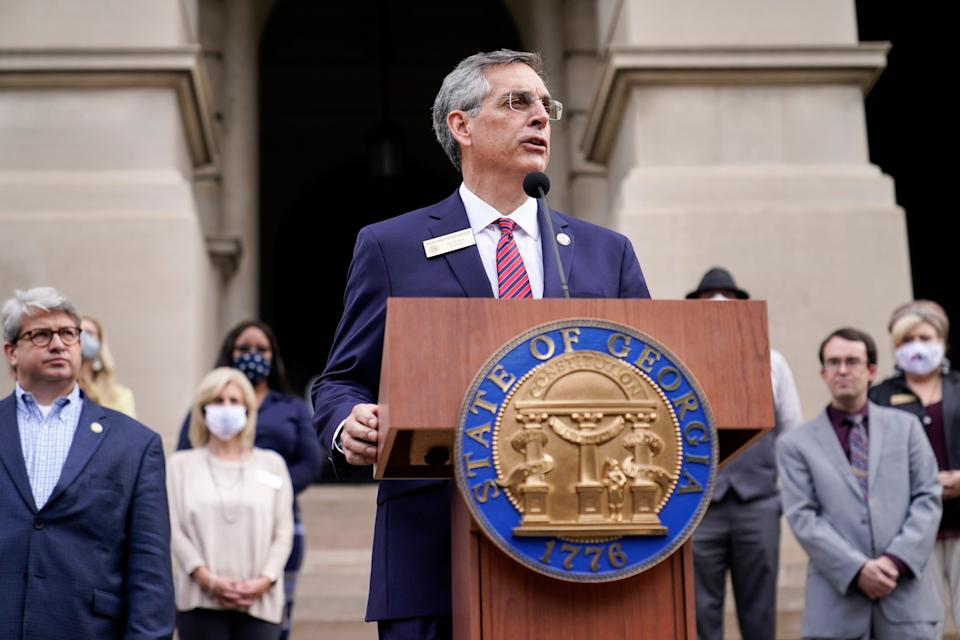 Georgia’s new election law includes positive election reforms that make sure we have objective measures for absentee ballots and for identification of voters, and it will restore confidence in our elections.

But, aided by a complicit national media amplifying false or misleading attacks as fact, Democrats have pushed extreme legislation like H.R. 1 that would have violated the Constitution by federalizing elections and undermined the integrity of our election system. Various Democratic proposals would have thwarted states’ voter ID laws and curtailed Americans’ rights to free speech and association. Another extreme bill, H.R. 4, would give the U.S. Department of Justice veto power over local election law.

Our own U.S. senators, Jon Ossoff and Raphael Warnock, even offered a possible H.R. 1 amendment aimed directly at rolling back provisions of Georgia’s new election law. Their mischaracterization of Georgia’s law has already done damage, encouraging Major League Baseball to move the All-Star game from the Peach State.

This is not a new undertaking for congressional Democrats. For years, they have pushed election laws through, leading to a complex labyrinth of laws, rules and regulations that make running elections almost impossibly complicated for the county elections officials on the front lines.

Georgia’s secretary of State: Securing elections has overwhelming support among our voters

As a Republican secretary of state, I’m disappointed that leaders in my party failed to prioritize election reforms – and to repeal bad Democrat-passed laws – when they had unified control of Washington just a few short years ago.

While they parade around today as warriors for election integrity, they did nothing when they had the chance.

Take the National Voter Registration Act of 1993, also known as the Motor Voter Act. It prohibits list maintenance from occurring 90 days before any federal election. That buffer makes it effectively impossible to conduct list maintenance during an election year, which have both primary and general elections for federal offices.

In the meantime, the voter rolls get bloated with outdated and obsolete information. Americans are constantly on the move. Around 10% move every year. In 2019 alone, 284,541 people moved to Georgia while 253,565 left.

Georgia’s pool of eligible voters changes by the tens of thousands every month. Over the course of a year, the damage to the accuracy of the voter rolls snowballs. On paper, this means out-of-state voters remain able to cast ballots in states where they no longer live. Voters who move precincts cast ballots for candidates who no longer represent them.

This is also an integrity issue. California’s former secretary of state and current U.S. senator, Alex Padilla, criticized Georgia for planning to remove 100,000 obsolete voter files, but he was forced by a court settlement to remove 1.5 million from California’s rolls after Los Angeles County was found to have a voter registration list 112% the size of its adult citizen population.

This breeds conspiracy theories and undermines confidence in elections.

Democrats and their allies in the media haven’t always seen every effort to update voter rolls as “suppression.” The same 1993 law – signed by President Bill Clinton and passed by a Democrat-controlled Congress – that forbids voter roll updates within 90 days of an election also requires regular list maintenance.

The media had no problem with this. Back in December 1994, The New York Times called the National Voter Registration Act a “common-sense measure designed to make it easier for all Americans to participate in the democratic process.”

The story is the same in Georgia. In 1997, a Democratic legislature and governor enacted our state law that mandates regular cleanup of voter lists. In Georgia, I successfully defended that state law in 2019 from efforts by Stacey Abrams to end it. Judge Steve Jones, an Obama appointee, ruled that “there is no evidence at this time that” voters removed were “precluded or burdened by registering to vote again.”

The suppression narrative crumbles immediately in the face of facts.

Though Republicans in Congress have not made any effort to roll back unnecessarily burdensome election regulations, now is the time to start. Our county elections officials need to be able to effectively plan elections. They need the tools to cut down lines and ensure voters have the equipment they need to cast their ballots. And yes, they need accurate rolls to uphold confidence in America’s elections.

Now is the time for Republicans to lead on election regulation reform.